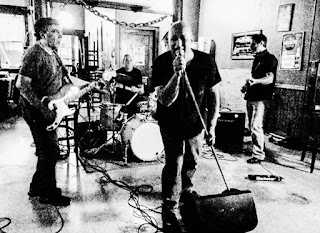 Ever hear that old ridiculous stereotype about how people over 30 that are still in bands are sad losers hiding from real life because they think they're still gonna "make it" eventually, or whatever? You know--working odd jobs and touring the country while living in squalor with five other punks is cool and bohemian when you're in your 20s, but at some point the whole thing just becomes sad and you need to put the guitars and drums away and have a real, boring life? Hell, Metal Sucks ran an article based on the premise a few years back. Thing about stereotypes, though, is that they're rarely true--most musicians are plenty capable of holding down Real Big Person Jobs while practicing their craft at nights on weekends, using some vacation time to play out of town when they feel like it, and using some to hang out with their families. They play music because they love playing music, not out of some naive desire to "make it" (what does that even mean anymore, anyway?), and frankly, contrary to what that Metal Sucks article would tell you, musicians get cooler as they get older. Want proof? The members of Fowlmouth are cooler than any of us could hope to be. They're as old as your dad, they live in Kenosha of all places, and play the least pretentious brand of dirty, bluesy punk rock you'll hear outside of the 1970s.

The Fowlmouth dudes are all Kenosha scene lifers, having gigged around town for decades in bands named things like Old Junk and Ash Can School, although lead carnival barker Jeff Moody's been spending the last couple decades doing more rock criticism than rocking, having run the StripWax record review comic strip for years 'n' years. Finally, right around his 50th birthday, Moody decided it was time to get off the sidelines and mix it up, taking the smirking, sardonic wit he developed in the funny papers and transposing it to lyrical form. Instant local classics like"Ms. Ramone" and "The Christler" (if you've ever spend time in midday downtown Milwaukee you can probably guess what that song's about--if not, click through and check out the cover art) deliver snarky dad-joke bon mots over dirty riffs built by smashing the Stooges together with pure, unfiltered badass small town Wisconsin bar rock. There's nothing flashy about Guy Crucianelli's meat-and-potatoes guitar riffs, but the musicianship displayed by him, bassist Dave Aiello, and drummer Tom Selear is all gravy. (Fun fact: as soon as Tom sat down behind the kit at Howl Street and started warming up, Shane's eyes got a little big and he walked into the control room saying, "ok, these guys can play."

Their song for UNINTIMIDATED is the future state anthem "Too Tired to Riot," an impossibly catchy ditty that unceremoniously encapsulates everything our little project is about: being fed up and wanting to make a huge noise, but real life wears you out, so you do what you can with the tools you have. So instead of rioting and marching and running for office, Fowlmouth writes an instant working-class singalong classic that you'll find yourself humming for days once you sing it. It's everything they're about compressed into 2:21, and they stormed into the studio, belted it out, and were out the door in 52 minutes. No bullshit, stripped-down blues-punk that's ten times cooler than your band and 50 times as fun. I hope to be half as badass in ten years (which will get here way faster than i want it to, regardless...the faster it comes, the faster that Metal Sucks article will look lamer and lamer and lamer. Nothing's less cool than telling people how cool they're not for doing what they love, after all).

Posted by DrAwkward at 9:37 PM