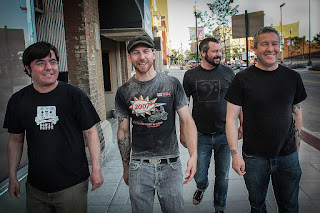 I spent 10 years living in Oshkosh, WI after high school, attending college and discovering punk and indie rock in the Fox Valley and Green Bay scenes of the mid-1990s. As my own musical palate was developed and the bands i played in evolved into better, louder, (hopefully) more original noise-rock juggernauts, it was done understanding that there were larger music scenes in Madison and Milwaukee--and to a lot of music lovers in the state, those cities were all that mattered. This, of course, only grew the chip that's always rested on my shoulder as my bands and i have strived to put together something unique--sometimes stumbling across the way, but always dealing with the repercussions of not following the latest trends, away from the big music centers of our country (or even our state for a while there). The bands i have played in over the years have never been the hip local bands that set the town on fire, even now that we're based in one of those Wisconsin music centers--Milwaukee--instead of Oshkosh. But it turns out that the title of Wisconsin's best, most interesting indie band probably resides in Oshkosh after all, in the guise of some old friends that we met along the way, not long after the start of their own journey to find their voice. Yep--Oshkosh's Haunted Heads have become a must-see outfit, away from the hip spotlight of Wisconsin's larger music cities (i mean, we don't have an Austin or a Brooklyn here, but fuck it), where they could just do their thing and do it better than most could hope.

There's nothing flashy or complicated about what Haunted Heads does--you could pull elements of their sound out of 90s standouts like The Wrens, Built to Spill, Silkworm, or loads of other bands. But influences mean nothing without the talent, the harmonies, and the pure songwriting skills to mold them into great tunes. And Haunted Heads write amazing tunes. Their 2014 self-titled EP is a brisk, crisp march through shimmering chords, rapid-fire drumming, earthy, organic bass lines, and off-kilter, instantly infectious yelping melodies that stick in your head for weeks.

Watching these guys put a song together for UNINTIMIDATED at Howl Street after decades of knowing them was a treat and a joy. They blasted through "285 Feet Tall" about twice before they knew they had the take they wanted, leaving drummer Chad and bassist Kyle to chill out on the sofa while guitarists Andy and Eric weaved their vocal harmonies together like a beautifully disjointed patchwork quilt of melody lines. "My hands and feet are made of wood/with billion-dollar strings/and i can be anything!" It's one of their most blistering tunes, played with a punk rock moxie that matches the snarky accusations of their lyrics, and easily a standout on an album of unstoppable standout tracks.

These boys have been at this rock 'n' roll thing for more than two decades at this point, floating through various bands and developing their talents before settling into their current configuration (The Fox Valley in general and Oshkosh in particular excels in the classic Local Scene Trope of a half-dozen key players forming bands, putting out amazing records, breaking up, reforming in a slightly different lineup, and repeating the process). I could list a half dozen of their former bands off the top of my head right now--Crayonblack, Salt, Chinaski, Shelf Life, Congratulations on Your Decision to Become a Pilot, The Willis, Happy (ok, that's seven). Is Haunted Heads the culmination of all those groups, the best thing they've done to date? Who knows, but i'm guessing these guys aren't done getting better. After all, when there's no hot trend to slave yourself to, no pressure to "make it" or be the new Cool Thing because you've stayed put in the place where you grew up, the only proper direction for your creative energy is right back into the songs...the way it should be for everyone. I'm guessing it may be hard for these guys to peak if they just keep evolving.

Posted by DrAwkward at 8:21 PM