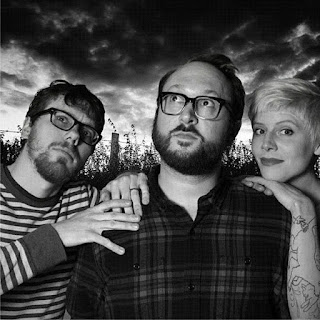 UNINTIMIDATED is a punk comp, in ethics and origin--even if not every band could be strictly referred to as "punk" in style. Heavy Hand, by any definition of the word, is punk as fuck. The opening track from last year's Northwoods Knives release is called "David Bowie Wants to Steal Your Baby" and is all of 56 seconds long. (Yes, Labyrinth references are super punk.) Other hit singles from this nine-song, 20-minute barn-burner include the classy "Milwaukee Cum Dumpster" and "Motherfucking Bobcat." Their song for the UNINTIMIDATED comp? "White Power Norah Jones." When asked where that title came from, Heavy Hand guitarist/screamer (and UNINTIMIDATED co-coordinator) Tony Weber just looked at me and said, "Scott Walker is a total White Power Norah Jones," and left it at that. Totally ridiculous. Totally punk rock.

The economy with which Heavy Hand does their business makes them a perfect fit for a DIY grassroots political project such as ours. Gritty, fuzzy riffs that are equally simple and catchy as hell, blasted out over a deceptively basic but solid rhythm section (bassist Isa Carini & drummer Chris Roberts, both formerly of the not-in-any-way-similar-to-Heavy-Hand Scarring Party). Like all the best punk rock, it seems simple, but it's deceptively so, as not just anyone can throw a few chords together and make tunes this catchy. Hell, not many bands can make songs this hummable with lyrics this hard to make out. It's a feat!

This sounds like a lot of silly business, it is true. But don't think that this band doesn't take what they do seriously. Otherwise they wouldn't be on our comp, yo. It takes dedication to be this goofy and fun while delivering delicious bite-sized nuggets of rusty buzzsaw riffs that slice through your forehead and deliver lethal doses of punk rock tetanus. So let's hope that ol' Scotty Walker gets "White Power Norah Jones" bored into his brain to the point where it locks his jaw shut and he starves to death. I mean, "Dead Walker" is a name just begging for some new punk band to adopt it, right?

Posted by DrAwkward at 9:54 PM