Oh hi, errybody! The blog's been a bit quiet (shit, we still have to tell you all about Donoma, Body Futures, Damsel Trash, Testa Rosa and Venus in Furs!), but stuff's been a-happening! Our tireless squad of editors have been diligently assembling and cutting rolls of film (not really; it's all FinalCut now. It's 2016) in the hopes of putting together 13 kickass videos full of anti-Scott Walker piss, vinegar, bile, and guitars, bass, drums, fiddle, autoharp, keys, etc. Meanwhile, the songs themselves are pretty much mixed and will be off to mastering at the beginning of January. Man, we can't wait to share these with y'all.

"So guys, about that -- when will you be sharing these with us all?" Well, it's tricky when you're a bunch of people with day jobs trying to make a huge art project happen on your free time, but we're still shooting for late February/early March to have this all done and ready for consumption. A big x-factor in that equation, of course, is money and whether we have it, because pressing CDs and DVDs ain't cheap! But that's why one of our executive producers, Tony, is throwing a little shindig for us in Racine on January 30. 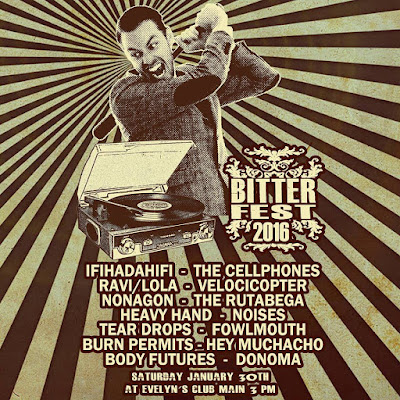 Just look at that bonkers lineup, you guys. Featuring five UNINTIMIDATED bands! Free admission! Raffle tickets being sold to raise money for our little project! Mark January 30 on your calendar and get ready for a batshit awesome time!

More to come in 2016, you guys. Scott Walker's not running for president anymore, but he's doubled down on his special brand of homespun bought and paid for evil. We're ready to yell at him a whole lot with distortion and loud noises and shit. Yell along with us!

Posted by DrAwkward at 8:23 PM No comments: