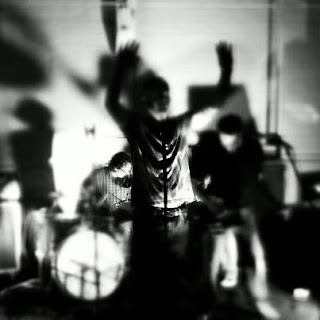 You probably haven't heard of Drillers, and there's a reason for that, other than the fact that they're an obscure Wisconsin punk band like all the obscure Wisconsin punk bands on our little compilation. Drillers are a collection of friends from Milwaukee, Madison, and Western Michigan who until recently recorded and performed as part of a collective of musicians called The Book-Burners. After that group called it quits, a few of them decided they wanted to keep recording and playing together, so they did. It's as simple as that, really.

Visiting The Book-Burners' Bandcamp site is to be deluged by recording after recording, which was the Burners' M.O: write songs, record them in the home studio, throw 'em up, repeat. Immediacy was the objective; of the five Book-Burners, whoever was available generally ended up on the recording (they lived in five separate cities, after all). Waiting for everyone to be in the same room wasn't generally in the cards; the song needed to be shared, and shared it was, timelines be damned. The result was a sweeping discography of raw, low-fi nuggets of musical pearl formed from grit covered in just a bit of smooth. A rare physical document surfaced in 2013 with the release of People's Songs, a vinyl release on Milwaukee's Latest Flame Records. The album was produced in the same manner as all of their recordings: in their own studio on their own terms. Economical, bare-bones, and absolutely urgent.

That sense of working-class urgency has carried on into the first recording from Drillers, "Starving," recorded during the UNINTIMIDATED sessions on the last weekend of August. The challenge of setting up in a recording studio and churning out a completed tune in two hours was tailor-made for these guys, and they more than rose to the task. "Starving" is a thinly not-at-all-veiled threat directed at a certain executive in Madison regarding what may happen to him if the Wisconsin middle class continues its downward spiral toward irrelevance. Let's put it this way--when the "Starving" singer/drummer Bradley explained to us what they had planned, he asked us, "is cannibalism too taboo a subject to tackle on this record?"

Provocation? God forbid we have some of that on our punk compilation. You may not know who Drillers are right now, but get this comp in the right hands when it becomes a real, physical thing, and who knows how well-known they'll become? If they don't catch on with musical audiences in Wisconsin, they should at least get on the radar of Scott Walker's security detail.
Posted by DrAwkward at 9:04 PM