Well That Was a Shitshow, Or: Scotty's Desperate Last Gasp 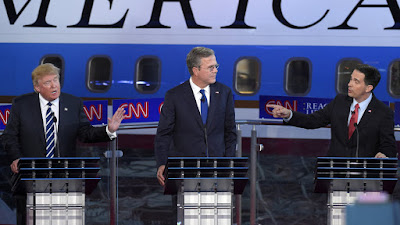 "You wanna talk about the Apprentice -- we've already got an apprentice in the White House!"

How long do you guys think Scotty had that in his back pocket, waiting for his BIG MOMENT to bust that out on national TV? And of course, when he got his chance to zing Donald Trump with it, it sounded just as prepared and forced as any of the other little sound bites the GOP candidates prepared for Wednesday's "debate." And of course, Trump proceeded to destroy Walker by doing what he's done so well during this campaign: use his lack of political history to his advantage by assaulting the policy shortcomings of his opponents while the other ten people on the stage have nothing to fling back at the man who's never held office (true, Ben Carson and Carly Fiorina are in the same position, but they don't do blowhard the way Trump does blowhard).

It was pretty gruesome, as the link above summarizes:


Trump called out Walker’s terrible economic record in Wisconsin. Walker accused Trump of using Democratic talking points. Walker accused Trump of being a bad business person and taking companies to bankruptcy. Trump responded by saying, “When the folks of Iowa found out the true facts of the job that you’ve done in Wisconsin, all of the sudden you’ve tubed. He was number one now he’s number six or seven in the polls."

He continued, “Look, we brought it out. You were supposed to make a billion dollars in the state. You’ve lost two point two. You have right now a huge budget deficit. That’s not a Democratic point. That’s a fact, and when the people of Iowa found that out, I went to number one, and you went down.”

Why has Trump appealed to so many on the right? He doesn't stock up on little cutesy sound bites like "we already have an apprentice in the White House." Right there is why he comes across as authentic to a huge swath of the populace (fake hair and all). Sure, he's full of shit, but as far as he's concerned, he's not bullshitting you. People can sense that he means what he says. It's why people are flocking to Bernie Sanders in droves as well--people can just sense that he's authentic.

Walker? Every time he got the floor, you could see his coaching in action--you could tell his handlers said "you need to come out swinging this time! You barely said anything last debate and now you're tanking in the polls!" It was forced, it was clumsy, it was pathetic, and Trump sensed it immediately and went on the attack, like a wild dog smelling fear.

It's pretty likely that Walker's campaign for President is breathing about as much as The Walking Dead, and we still have months to go before the Iowa caucus. Lots of people have asked us, "what if he's irrelevant by the time UNINTIMIDATED comes out? Trump's been destroying him." Well, he won't be irrelevant in Wisconsin until (hopefully) 2018. No matter how much of a punchline he becomes on the national stage, he and his cronies in the Legislature will still be working to destroy public education, labor rights, and apparently Wisconsin's open records law--still.

As Walker continues to run roughshod over everything that's ever made Wisconsin great while simultaneously getting laughed out of the 2016 race, what does that say about the state that elected him to the Governor's mansion three times since 2010? As satisfying as it is to see the national media treat Walker the way our state media should have, it's really hard to watch him squirm, think "and he convinced enough Wisconsinites to treat him seriously?" and not feel a deep sense of humiliation. As embarrassed as Walker should be for clumsily lobbing talking points at his party's frontrunner like he's tossing home run derby meatballs, we should be doubly embarrassed that we ever let him get to the big leagues in the first place.

(image ganked from NPR)
Posted by DrAwkward at 11:03 PM

Email ThisBlogThis!Share to TwitterShare to FacebookShare to Pinterest
Labels: In the news, Propaganda