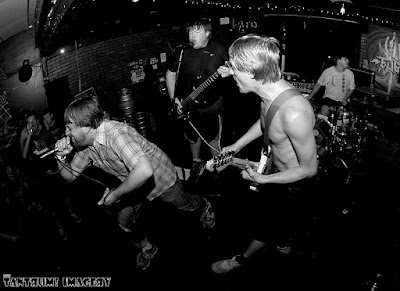 For all the poetic and witty couplets expressed in lyrical form over the last weekend, while 13 bands took two hours each to record protest songs about Scott Walker, it took Milwaukee's reigning kings of hardcore punk, Holy Shit!, to distill the sentiment to its purest outburst of the night, as vocalist Tab Man screamed "YOU MOTHERFUCKER! FUCK YOUUUUU!" into the mic while tracking vocals for "How About 'No,' Scott?," a just under two-minute blast of concentrated anger that ranks as one of the band's longest songs on record.

Holy Shit!'s been around since 2001, which makes them the second-longest-running band on our comp (behind our most recent subjects, IfIHadAHiFi, who started in 2000). When a band's been around that long, it's easy to take 'em for granted ("eh, i'll see 'em next time"), but every time they end up back in front of you, you find yourself beaten over the head with the reminder that these dudes are just as raging, just as hilarious, and just as essential as they've ever been, and you're a fool if you're in the area when they're playing and say to yourself, "eh..." Just give 2010's KBD OOP a spin and get your ears pinned back by 14 rapid-fire shots of straight-up old school that's way more diverse and adventurous than a collection of minute-long tunes has any right to be. If you're not grinning like a maniac and pumping your fist by the time "My Girlfriend is a Depressed Vegan Nightmare" whips around your ears for all of 40 seconds, you may not be cool. Which is probably ok, since these guys would be the first to tell you that they're huge dorks anyway.

But they're huge dorks with serious chops. You can't be this fast, this tight, without having some serious skills, and Eric's machine-gun drumming, Andy's lightning riffs, and Tony's earthquake bass never let things fall off the rails. Just ask our video director, Chuck--while filming Holy Shit! at Howl Street, all that could be heard in the live room (thanks to isolation booths) were drums, Tab Man' screaming, and lots of strings getting pummeled. It sounded like a complete mess, until we got into the control room and heard the full, glorious playback of "How About 'No,' Scott?" I'm not saying they're on Bad Brains' level, because was anyone? But these fuckers blast riffs tighter than Rick Santorum's asshole.

As you can probably tell from their song titles ("Jumping into a Goddamned Waterfall," "I Hate this Stupid World Because it Sucks Like Hell," "Bad Day Fishing"), Holy Shit!'s not normally a political band, but a certain sleepy-eyed prick in Madison convinced them to step outside the box once again and add another check to their punk rock bucket list, and we're really glad they did. It was all laughs and crazy jokes and slammed beers by the end of their recording session; not a bad way to close out a weekend.
Posted by DrAwkward at 8:54 PM