This is hilarious and comes to me via my friend Carlin in St. Louis:

Scott Walker's campaign is holding a "meet and greet" at Sugarfire Smoke House, a BBQ joint in St. Louis:

Please join us for a meet and greet with Governor Scott Walker, Sunday, July 26th, 2:15 PM CDT, at Sugarfire Smoke House!
Address: 9200 Olive Blvd. Olivette, MO 63132
Event Starts: 2:15 PM CDT
Attendee Requirements:
RSVP: You must RSVP and bring your registration ticket with you to the event for admittance.
Ticket/ID: The name on your registration ticket must match your government issued photo ID.
For press inquiries contact press@scottwalker.com.
Thank you for your interest - we look forward to seeing you there!

One hitch, though--the owners of Sugarfire say they know nothing about it, according to this message from their Facebook:

A little message from our owners:
We are in Austin this weekend doing some R and D on some BBQ to bring back to the Lou. We're getting some unkind messages on our social media that a politician that's running for president is eating at Sugarfire tomorrow. This in no way, shape, or form is an event hosted by us. We don't take reservations or hold tables for anybody. We also don't take into consideration anybody's politics or beliefs that want to eat here, we don't have time for that. We make delicious food for everybody, no judging or questions asked.
Thanks, Mike, Charlie, and Carolyn

And another line from the owners, in the comments:


never heard of the guy but he's got an evite out kind of making us look like we're involved, which we are definitely not.

Definitely interested in what the scene will be like at the restaurant today. The restaurant says they are open to the general public today, but the Walker campaign states an RSVP is needed. Could be some interesting drama. For what it's worth, the owners also posted a photo of an email they were sending the campaign to show they didn't appreciate being made to look like they had any political affiliation (this is also from the Facebook comments on Sugarfire's page): 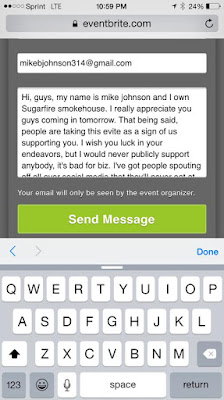 To be clear, Sugarfire is stating that they have no issue with Scott Walker eating there; they have an issue with being made to look like they support him, and if a Democratic candidate pulled the same stunt, they'd issue the same disclaimers, according to the owners.

If we hear any more news about how things shake down at the restaurant today, we'll share it here.

UPDATE (4:50 PM CDT): Carlin went to check out the event, and said a whopping two dozen people tops were there to see Walker:

"Turned out to be a bit of a non-event... but dude was there, in the actual building for a whopping 10 minutes MAX - him and his actual crew did not purchase or consume any food...They then spilled outside and he did a little more glad-handing and book signing outside - one of his security dudes (earpiece and everything) was holding the door open for a long time and I told him to shut the door and quit letting all the a/c out... he tried to give me some of the intimidation thing right as a waitress came up and said "Please close the door, we don't need the flies or the heat in here." And he closed it but gave me a little stinkeye."

Walker is to attend a July 26 event at the St. Louis home of Rex and Jeanne Sinquefield. Rex Sinquefield is a retired investment firm founder who has bankrolled initiatives to cut income taxes and curb the ability of teachers' union to negotiate tenure protections.

An invitation lists several prominent Missouri Republicans as members of the event's host committee. They include former U.S. Sen. Jim Talent, who was an adviser to Mitt Romney's presidential campaign, and Lt. Gov. Peter Kinder, who recently launched a 2016 bid for governor.

Posted by DrAwkward at 8:55 AM

Email ThisBlogThis!Share to TwitterShare to FacebookShare to Pinterest
Labels: In the news