Meet the Bands: TYRANNY IS TYRANNY 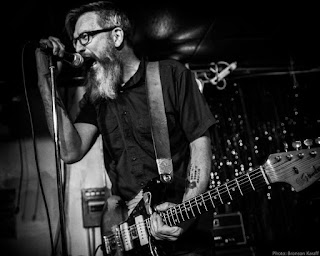 We assure everyone that the presence of burly bearded dudes on our first two bands is a mere coincidence of reverse alphabetizing. In any event, it would have felt weird doing this project without Tyranny is Tyranny, a band named after a chapter in A People's History of the United States by Howard Zinn, and whose terrific new album, The Rise of Disaster Capitalism, sports a title inspired by a book by political activist, author and filmmaker Naomi Klein. Guitarist/vocalist Russell Emerson Hall is in the midst of a long career of using music as political speech; his previous ensemble, The United Sons of Toil, performed on the Wisconsin capitol steps in Madison during the 2011 Act 10 protests. 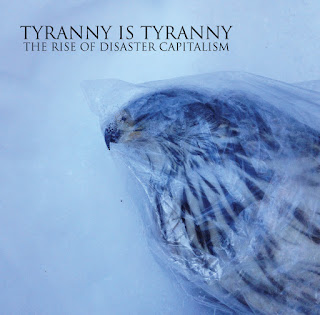 Tyranny pulls much of their musical influence from the similar noise-rock veins mined by Volunteer, though Volunteer's immediate punch-the-face approach is replaced here with a more deliberate slow burn of riffs, builds, and dynamic shifts (the better to let bassist M. Guy Ficcioto's trumpet exhale over the occasional lulls in the tempest). Indeed, Tyranny is Tyranny's shows of late have almost felt structured like movements in a noise-rock symphony, one seven-minute epic leading into the next like interlocking pieces to a larger, more grandiose work. And these men have ideas and ideals that match the sweeping scale of their music. The 14-minute "Victory Will Defeat You" is a thesis for the band's entire reason for being, extolling the listener to stand and face the fire:
Peace has cost you your strength.
Victory has defeated you.
Unity weaned on rhetoric,
Enforced by arms.

A band of action, for sure, and one we are privileged to have appearing in our project. You can find all their releases at tyrannyistyranny.bandcamp.com, released by Phratry Records of Cincinnati, Ohio. Get into it.