Oh hai! Been a few days since we posted last. It's been a crazy few days, but let's get back into it. So far, we've had lots of super-loud, aggro sludge and noise-rock bands. Howsabout we diversify with something over on the indie-pop side of things? Behold thee mighty Midwest Death Rattle! 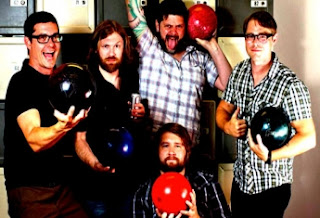 The shimmering pop tunes of the Death Rattle are finely crafted nuggets built first and foremost on solid songcraft and canny arrangements that wouldn't be possible if not for the truly impressive musicianship on display on each of the nine tracks that comprise their debut self-titled release. Each member of this band has a Jedi-like mastery over their instrument, each playing their role in a sound flavored by sprinkles of Modest Mouse, some Flaming Lips psych tinges, a humble dash of lounge act vermouth, and hooks, hooks, hooks.

Have i mentioned how fun this band is to watch live? I mean, you can channel Freddy Mercury crooning over Bootsy Collins and Gene Krupa all night long, but if there's no showmanship, no energy, no fun, who the hell cares? Not saying Midwest Death Rattle are going to be hosting any gear bro clinics anytime soon, but these guys throw off so many good vibes while showing off their chops on stage, it's hard not to get swept up in the sunshine. For a band with the word "death" in their name, they sure are one of the liveliest batches of shredders you'll run into. Every Death Rattle show is a guaranteed smile-fest, whether you're grooving to the songwriting or just basking in the vibe.

Not that they're hippies or anything. They'll straight-up rock your ass off. Don't believe me? Their shit is embedded below. Crank it yourself and dig the fact that we've got some popsters classing up the joint with some party jams up here in UNINTIMIDATED land. Bet you didn't think hating on Scott Walker could sound like a house party.

Also, they're apparently avid bowlers, judging from that photo. What's more Wisconsin than that?