Kick Rebecca Bradley off the WI Supreme Court this Tuesday and Bum Out Scott Walker.

Wisconsin, we need your help on Tuesday. 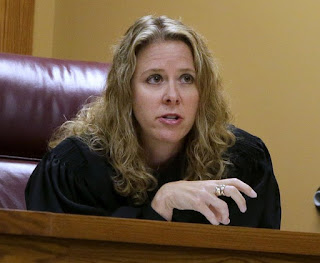 State Supreme Court justice Rebecca Bradley is a career-long Scott Walker toady, having been appointed to three different positions by him. She's his lapdog, pretty much. She recently cast the deciding vote on a case that has severe repercussions on our Fourth Amendment Rights to be protected from illegal search & seizure. Please read this and this Journal-Sentinel article to learn more about it. What's important is that she did not even hear the oral arguments in the case because she wasn't on the court when they happened, YET SHE CAST THE DECIDING VOTE ANYWAY. Like the rest of the Republican wing of this court, she is corrupt and shady.

But i have good news! Her seat is UP FOR RE-ELECTION, RIGHT NOW. We have a primary for "non-partisan offices" (in quotes because partisanship has destroyed the integrity of our court) on TUESDAY, FEBRUARY 16, and Rebecca Bradley is on the ballot running to retain this seat, along with TWO opponents. Only the TOP TWO move to the general election in April. One of her opponents is JoAnne Kloppenburg, a good judge who ran for the State Supreme Court in 2011 but lost to another Walker stooge, David Prosser (who ironically voted against Bradley on this 4th Amendment thing).

Experts are projecting that Tuesday's primary election will feature 10% voter turnout. That means YOUR VOTE HAS MORE POWER THAN NORMAL. Please go to the polls on Tuesday and help toss Rebecca Bradley out of the Wisconsin Supreme Court. She sucks, and it would bum out Scott Walker.

Please share this message and get the word to your friends to PLEASE VOTE on Tuesday. REAL CHANGE BEGINS AT HOME, on the local level.

Posted by DrAwkward at 9:17 AM

Email ThisBlogThis!Share to TwitterShare to FacebookShare to Pinterest
Labels: In the news, Rebecca Bradley, Scott Walker